As Challenge Lead at the Amsterdam Economic Board, Jeroen Maas is focused on developing the region’s AI health ecosystem into a world-class hub by connecting the most relevant local players in academia, industry and government. The challenges remain daunting, yet Maas maintains his enthusiasm and sense of humour. In this interview he discusses the sector – and what data science and AI innovators will need to break out of the pack in the coming years.

The Amsterdam Area is aiming to extend the average healthy lifespan of citizens by two years by 2025 – the 750th anniversary of the founding of the city. That’s quite the birthday present. Can you explain how big data and AI are going to play a role in this – and the role of yourself and the Amsterdam Economic Board (the Board)?

“For us, it all started five years ago, when the Amsterdam Economic Board decided to focus on health and began identifying our region’s strengths. We found several powerhouses: one in AI and data science and the other in medical research and applications. This was at the time Google was promising contact lenses that could measure insulin levels – which incidentally never made it to market. But as a result, every self-respecting company and country was jumping on data and health. And we saw that the Amsterdam region had lots of opportunities.”

“The white coats and the black turtlenecks were not talking much, and they really needed to talk.”

“But we also identified a few problems: people didn’t really know each other. The white coats and the black turtlenecks were not talking much, and they really needed to talk. Many of these small pilots were failing and none were scaling – when perhaps they would have progressed faster or survived if people reached out to others working on similar things who were, literally, 100 meters down the road.

How the Amsterdam Area nurtures its AI Health ecosystem 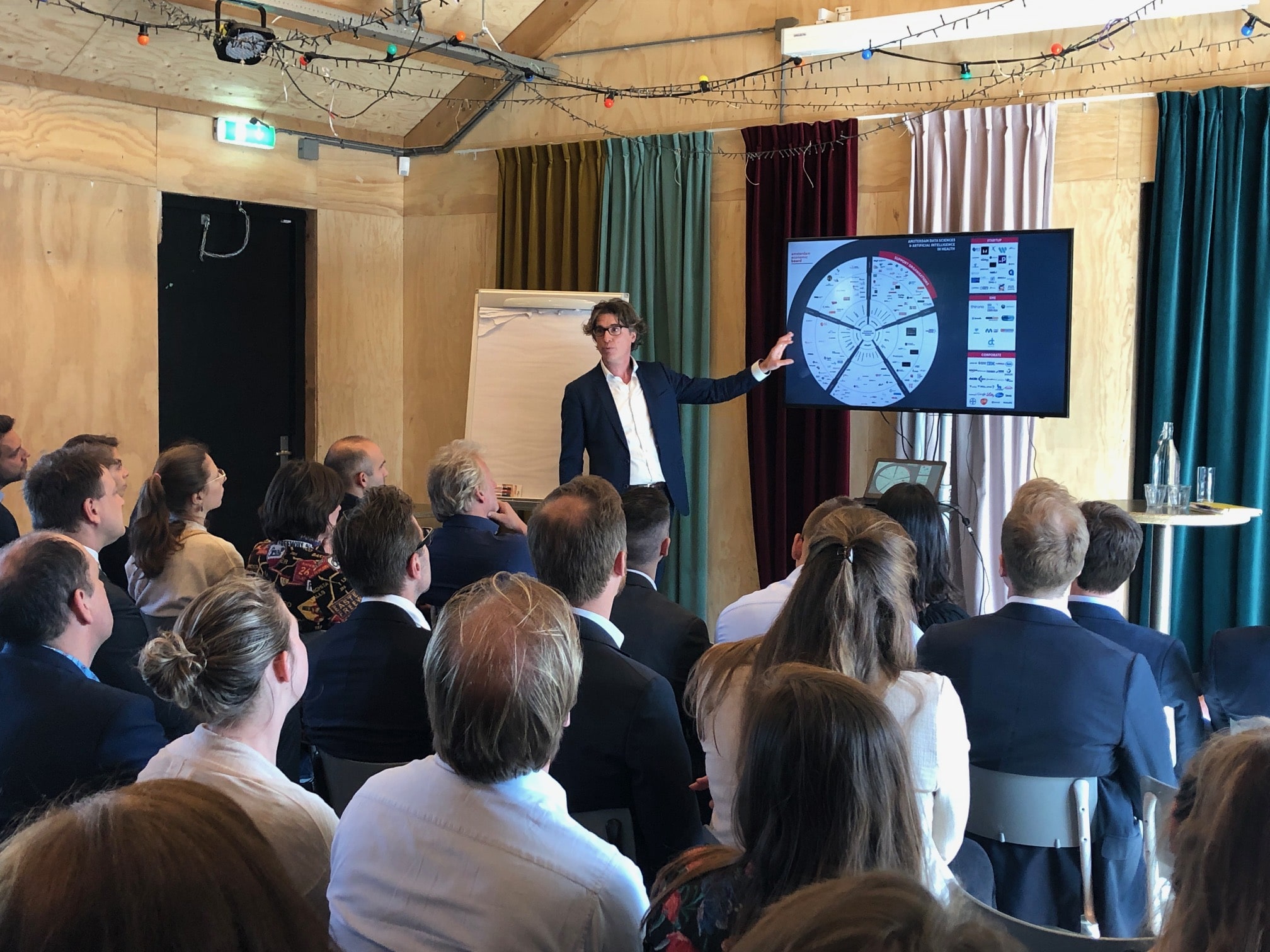 “Of course, privacy around data has been in the news a lot. People care about what happens to their information, and so do we. And naturally, the vision remains: “I choose who sees my data and for what purpose”. We must be very clear that the outcome of research is never traceable to individuals. But I think we can have a positive outlook on this. Public health truly is about the greater good. Medicine is not Google trying to sell my information so I buy more stuff… People are usually only too happy to share their information when asked to do so in hospitals if it means it can help others. The trickier step coupling enough data to reach relevant conclusions – not to mention scaling.”

Why is scaling in a clinical setting a problem?

“There’s a variety of factors – and there’s certainly a role that the Board can play here – for example, in helping find funding and setting up working coalitions. While there’s already quite a bit of money available for pilot studies, it’s harder to get money to scale in a clinical setting if you’re not a company. If you’re a surgeon, you already have a day job. While you don’t mind collaborating on a pilot, you don’t have the time to get involved with the scaling – someone else should do that.

The Ministry of Health is coming out with new regulations in January 2020 that stipulate that hospitals must start providing data sets related to certain disease areas that will be exchangeable as FAIR Data. While it’s starting quite small, it is a great basis for laying the groundwork for scalable solutions.”

Is it frustrating that this new law is only starting small?

“I do get annoyed sometimes. We can already collect different data from different collecting systems but here in Holland it’s happening very slowly. In Paris, 35 hospitals are already on the same data system with eight million unique patients. And they have that connected to weather and other data to better predict, for example, what intensive care can expect in terms of arrivals. And in Latvia they go even further. And both countries are working under the same European regulations as the Netherlands! They’ve just been much better at interpreting the law and putting it into effect and making sure it’s all workable.

In terms of the Board’s work in the Amsterdam region, we’ve been making very slow but steady progress towards connecting the Amsterdam University hospital with OLVG hospital and the Netherlands Cancer Institute (NKI) to make their data connectable for a better patient outcome.”

But as far as becoming a worldwide AI hub, will Amsterdam catch up to France? To Latvia?

“Yes, in terms of AI. Certainly, compared to France, we’re doing very well. What we have here is world-class AI knowledge – the hardcore artificial intelligence people. We also have the people who know how – and this is a whole other science in itself – to use that and put it into practice. And we have our pilots. But yes, we need to work on how to scale. That’s the last step.”

And how do you see the long-term future in terms of AI and data science revolutionising public health?

“I see its future role being less about the cure and more about prevention. There’s a certain point where people go to the doctor. But that’s usually only when symptoms become very severe. What we’re particularly interested in is that ‘twilight zone’ before people go to the doctor. There is so much information surrounding that we are not currently using. This data from the ‘twilight zone’ didn’t use to exist: doctors generally only had data from the point that patients stepped through their door. But now that we are all carrying phones, we’re continuously creating data: in sickness, but also in health. From searching for symptoms on Google to our calendar appointments and even when we are not using our phone at all: our devices act as a comprehensive diary of our health. On top of that, we can use AI to better use the historical data that all our GP’s have on us to search for early indicators of the onset of diseases” 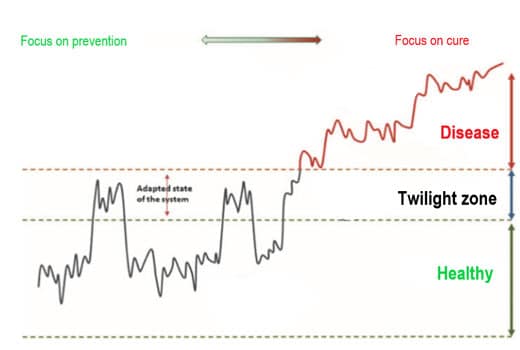 “So, what we would like to do is whenever people reach the twilight zone that we push them back to the healthy status. But when to make that push, we only learn over time as we discover certain connections. Just look at lung cancer. My mother’s GP told her when she was pregnant: “Hey, you’re nervous. Your hormones are playing up. Just have a cigarette and relax. It’s good for you.” We just didn’t know the connection.”

And that’s what AI is so good at: making the connections…

“Yes! And it’s much better at it than us humans! It can make the connection between certain occurrences or behaviours and disease. You only find the connections if you look at certain time periods and analyse a lot of information. That’s what AI can do! It can find the red flags of a certain disease while it’s still in the twilight zone – before the symptoms hit. And that’s what brings us closer to precision medicine and, in turn, closer to prevention.”

As we enter the 2020s, what are the top innovation challenges that AI and data science experts should focus on?

“I have two different views on that. One thing is that it will become commoditised if it’s not already. Namely, everyone can use AI and apply it to their data science. It’s not that difficult. Most of the algorithms are open source. So, you can find them and use them and apply them. The difficulty is more and more about applying them correctly so that you have a useful and actionable outcome. And that’s what you need to get it accepted in a clinical setting or in the consumer market – you need to show effect and that it really helps. In this way you also build trust.”

And you also build excitement, media coverage and a snowball effect… So, is this the road to scaling? That’s what AI can do! It can find the red flags of a certain disease while it’s still in the twilight zone – before the symptoms hit. And that’s what brings us closer to precision medicine and, in turn, closer to prevention.

Then there’s the other view – from a more research-oriented perspective. The future will be about multimodal applications using different sources of data. If you treat a patient with cancer, don’t only look at the clinical epigenetic data of the tumour, also look at what the patient eats, whether the patient exercises etc. Then you can combine these different data sources for better diagnosis and more precise treatment.”

And how will the Board contribute in the coming years?

“We will continue developing the ecosystem, so people meet each other and get access to financing, clinical adaptation and testing grounds. We want to provide a space where people can really ask each other questions – while also connecting them to European networks. We will also continue to facilitate the infrastructure – to make sure data can be used by the right people at the right time. And, of course, we will keep our eye on the big ball: helping scale-ups with business models, finding their first customers and connecting them with the right data streams.”

Read more on AI and life sciences and health here.