Just a few months ago, Active Collective joined our Network Council. Director Raymond Martens feels in his element here. "Innovations work best through collaboration. Solutions get more impact when you work on them in co-creation."

In recent weeks, Martens, like many others, made extensive use of ChatGPT and Dall-E, two applications by Artificial Intelligence research organisation OpenAI. As a techie, that made his heart beat faster, to say the least. Give an assignment to ChatGPT and you’ll get computer code, an entire graduation thesis or an excellent LinkedIn post. Dall-E produces beautiful images, based on a written assignment. 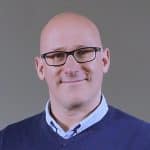 “This is unprecedented,” Martens said. “I think this revolutionary technology is going to cause an unprecedented correction in the labour market. The use of AI will completely restructure our knowledge economy. Classic service professions selling their knowledge: that really won’t be over tomorrow, but I think there’s going to be a major revolution. Already there are so many examples of departments being kept in place, when automation can easily take over their work.” Martens even thinks OpenAI may well be a solution to current labour market shortages.

From vision to tangible product

Thirteen years ago, Raymond Martens started Active Collective, a digital agency that translates visions and ideas into real, tangible and innovative digital products or services. The company has since matured into an organisation with about fifteen employees and a sizeable order portfolio. Active Collective is working on the preventive health platform for Preptic, which provides more insight into your own health and guidance on how to improve it. The company also built an app for Lidl employees to communicate with each other, strengthening trust in Lidl as an employer.

Since the summer of 2022, Active Collective has been a member of the Network Council. “We are only just dipping our toes into the pool of the Amsterdam Economic Board,” says Director Martens. “But I’ve already seen a lot of great things.” He attended two Medical Data & Pizza meetups at Amsterdam UMC and a colleague attended a Life Sciences Café. “Those events are close to what we stand for: driven by content and innovation and it’s all about openness. That is literally the dna of Active Collective. Without the people around us, our technology doesn’t reach the rest of the world. Innovations work best with collaboration. Solutions become more impactful when you work on them in co-creation.”

Cooperation between government and industry or between science and industry are good examples. “Governments like to publish policy papers of dozens of pages, scientists write long scientific papers on innovations. We as corporates can help quickly test whether something actually works in practice. In a few days we make a prototype and validate it with stakeholders. Such a prototype can in turn help to find grants and investors and take an innovation further.” The deciding factor in a successful prototype collaboration? “You have to try your hardest to really understand each other.”

Design plays an important but often underappreciated role in digital innovation, Martens says. “I’m not talking about visual design, but functional design. That is very rational and scientific and it’s about connecting technology to the needs of the end user. What data do they need? And how to optimally present that data? I’ve met with organisations where a project had been worked on for two years without ever talking to the end user.” According to Martens, this is also why promising innovations often fail to scale up: they are not sufficiently attuned with and to the end user.

With the PICTURE project, commissioned by Amsterdam UMC, Active Collective shows how this can be done differently. Together with doctors and scientists, the company developed a digital web application that collects, structures, annotates and analyses brain scans. The application compares scientific research models with the MRI scans of individual patients. The data are presented interactively in a 3D model, making it user-friendly for the attending specialist. Sixteen brain tumor centers in five different countries are already using this application. “By comparing data with other patients, a specialist is able to make a better prediction of tumor development. This gives new patients a better treatment perspective, arguably increasing their chance at a longer life.”

Responsible data use as a starting point

Responsible data usage is the guiding principle for this project, as well as other projects that involve a lot of data. So in that way as well, Active Collective aligns with the Amsterdam Economic Board’s major themes. Initiatives such as AMdEX, Health Data Infrastructure, Smart Health Amsterdam and Data commons are good examples. Martens: “There is something magical about deep learning and AI. Organisations are still mainly looking at responsible data from a legal perspective. Does it comply with GDPR legislation? While it’s more about ethical and moral issues and what position you as a company want to take in this. It’s also about sharing data because you think others can benefit from it.”

Thinking about this is crucial, according to Martens. Whatever kind of organisation you are. “Otherwise you lose your competitive edge. The legal department does its best to keep up with reality, but that is difficult with all the rapid changes. That’s why it’s important to look at data use from an innovation perspective.” Martens encourages organisations that struggle with such matters to contact Active Collective. “That’s a main reason we joined the Network Council: to share our knowledge.”

Want to join the Amsterdam Economic Board?

Does your organisation also want to participate in breakthroughs that enable a smart, green and healthy future? Looking for ways to realise your sustainable, innovative ambitions? Check all opportunities to join the broad network of the Amsterdam Economic Board. Becoming a member of our Network Council is one of many ways to have a say on the most important issues facing us as a region.