The Amsterdam Economic Board and EY hosted another fully booked Amsterdam Life Sciences Café under the title of ‘Biotech ecosystem – an investor’s view’. Representatives from two of Europe’s largest life sciences and health venture capital (VC) firms gave an insight into how they discover new investment opportunities.

“This afternoon is a case of role reversal,” observes Dries Budding from inBiome. The firm has developed a diagnostic test that can quickly detect the vast majority of bacterial species in a single assay. “Usually VCs have to listen to our story and now we got to listen to theirs. I was surprised by how much deep analysis is involved.”

LSP (Life Sciences Partners) investment manager Felice Verduyn-van Weegen gave an in-depth explanation about how it makes investment decisions. “For us, our sweet spot is usually just after animal testing.” Then, LSP can contribute both with financial support and significant sector expertise and network to get the company through clinical testing on humans. This, if successful, is usually when Big Pharma or large  companies step in and help take a product to market.

LSP recognizes three areas of interest for the future of biotech. “Gene therapy has had a bumpy road since it was first introduced as a concept almost 50 years ago. And even though it has vast potential in treating all kinds of diseases, it remains risky,” says Verduyn-van Weegen. “We decided that for gene therapy, clinical outcomes would therefore be a big plus. We were introduced to a company called Xylocor and quickly became interested in becoming part of a €15 million financing.  Result: LSP was part of a €15 million financing package to develop the company’s angiogenic gene therapy for cardiovascular patients.

With pathogen resistance to antibiotics set to cause up to 10 million deaths a year by 2050, many companies are exploring the microbiome and its vast reservoir of microbial possibility. “Many companies have tried either shotgun or more targeted approaches, or thought about gene editing for certain human targets, but no one has thought about CRISPR targeting bacterial strains,” says Verduyn-van Weegen. Result: LSP became part of a €43 million investment into the Danish biotech. It uses CRISPR/Cas to selectively target and kill bacteria with specific DNA sequences.

Often called the “lost child of biotech”, some people now call neuroscience “the next oncology”. Consequently, increasing amounts of VC money is entering the sector. “the problem is that the risk is still higher for companies in the early stage, while in later clinical stages the chances are equal,”  says Verduyn-van Weegen. But then LSP found Arvelle Therapeutics, which has filed for approval in the US, and has run several successful human trials for its anti-epileptic drug Cenobamate” Result: LSP putting together a financial package worth €207 million to develop and commercialise the drug in Europe.

How to drive NL forward

Rogier Rooswinkel is a partner at Forbion and responsible for the evaluation and structuring of new investments related to diseases. He presented the findings of their recent Nature paper, ‘Mapping the European startup landscape’. The report describes some of the key factors for a successful biotech ecosystem.

The study focuses on four fundamentals to help translate research to the marketplace. They are: scientific research output, biomedical patent activity, presence of local biomedically-focused VC companies and availability of human capital.

Rooswinkel says that the Netherlands probably could invest more in science and education and in professionalising tech transfer offices to help protect intellectual property. But for him, there’s only one major pan-European problem that he thinks should be addressed immediately: human capital.

Part of the reason that US biotech firms attract the vast majority of VC funding is that they’re all mostly clustered around Boston or San Francisco. This makes it much easier to fish around for a strong team. While EU firms have to back up their great ideas with data before getting funding, US firms can more often attract funding simply based on a great idea. That’s because they can then quickly put together a strong team find the data needed. (Read the full presentation here: Amsterdam Life Sciences cafe 9 mei 2019).

How about the smaller fish?

This part of the session introduced a sobering fact: of the 600-900 proposals each of the two VC firms receive annually, they only go further with four or five. “Why don’t you give smaller amounts to more people?” someone asks.

“Yes,” says Dr Prof. Marten Smidt. “Just give me two million and I’ll be fine.” The audience laughs, but Smidt is serious. He is a molecular neuroscience professor at the UvA and director of the university’s esteemed Swammerdam Institute for Life Sciences (SILS). His nights and weekends are dedicated to Macrobian-Biotech, which is developing a new treatment for Parkinson’s. “We have the data: this can really help people. But it’s all going too slow. With a bit more money we could be running our tests concurrently instead of one at a time.”

Verduyn-van Weegen and Rooswinkel agree that more funding should be available to help startups at an earlier stage of development. However, they also admit that’s not really their department.

So how can the ecosystem’s smaller fish find investment? Perhaps this is a theme to explore in a future Life Sciences Café.

Our Life Sciences cafe’s are organised by the Amsterdam Economic Board and EY. As well as offering presentations and debates, each Life Sciences Café event is a fantastic opportunity to meet and mingle with colleagues from the life sciences sector and representatives from the broader business community in and around Amsterdam. If you have any feedback, ideas or extra information that may influence future editions of the Life Sciences Café, please contact j.maas@amecboard.com.If you want to be informed you can sign up for our newsletter here. 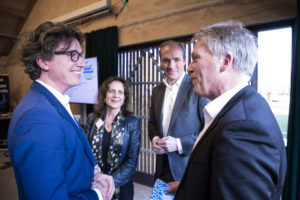 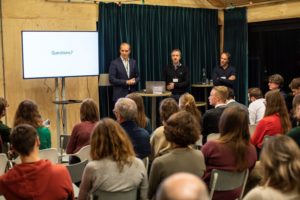 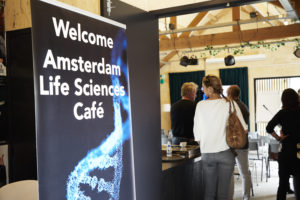