Over the past summer, Amsterdam Data Science (ADS) and Amsterdam Medical Data Science (AMDS) co-hosted a series of online lectures in collaboration with Elsevier and Google that explores ‘The Power and the Weakness of Data and Modelling in COVID-19’.

After taking a break, the ADS & AMDS webinar series returned with a final edition on 9 September 2020 with the title ‘COVID-19 and the Media’. The discussions dove deep into the world of ethics, fake news, tantalising conspiracies, and the power of storytelling.

Scientists need to step up – and up their storytelling skills

Dr. Marcel Becker (1961) is an associate professor of applied ethics at the Radboud University in Nijmegen, and has written several books on how ethics can be applied to real-world situations – from city hall to the digital realm.

With his talk ‘Truth in science, politics and media. Triangle or trinity?’ Dr Becker began by sketching out the current situation: we are not just dealing with a viral pandemic, but also an “disinfodemic”. And since information directly influences public behaviour, we need to improve the quality of the information that is circulating.

“It’s time to put information in the driver’s seat of global and national epidemic response. With policymaking, truth is in the common interest.” While claiming to not being a relativist, he believes the only way we can move ahead is to drop the whole process of defining “truth”. Instead we should instead apply it as a verb: “truth finding”.

It’s not a unified trinity but a triangle

But here again, the process of “truth finding” is different if you are a judge or a scientist. “A judge must reach a final verdict within a time frame, while a scientist cultivates an attitude of doubt and suspicion – a never-ending story,” says Dr Becker.

“Then there’s the differences between science and politics – with science following a method and politics weighing and acting on competing claims. For example, with social distancing, there exists convincing evidence that it is effective. But then questions arise in society: what is the price we pay in terms of health or money?”

These conflicting world views are only amplified through social media. “Of course, social media has advantages – it’s shown to contribute to larger participation in debate. But it also blurs boundaries: information from established scientific institutions looks the same as fake news. We need to do a better job at distinguishing between the digital medium and the original source – gossip versus books,” says Dr Becker.

Throw the parallel development of identity politics into the mix, where “knowledge” is linked to a sense of identity, you create a perfect storm for misinformation to fly around. As a result, “fear spreads faster than the infection.”

Dr Becker believes scientists should be more confident and outspoken and do more to clarify why their knowledge can be trusted – engage citizens in the science. “They should use the narrative frame – tell stories as journalists have long done. And they should stress that doubt is a virtue, not a shortcoming.”

The second talk, ‘Consensus and misinformation in the process of COVID-19 sensemaking’, segued nicely with Dr Becker’s observations. The presenter Emillie de Keulenaar is a PhD researcher at University of Amsterdam’s Open Intelligence Lab and Simon Fraser University’s Digital Democracies Group. She discussed her research on the effects of social media platforms moderating users’ access to COVID-19 misinformation (Read the full report here*)

De Keulenaar begins by noting that the information around COVID-19 is already confusing in itself – because we are still in a process of understanding all the details around the virus’s origin, transmission, and optimum treatments. So, misunderstandings already occur and conspiracies thrive in such a situation.

Under the pressure of governments and public health organisations, moderated social media platforms such as Facebook have actively broken from their earlier ethos as being “open and free”.  Active policies – and sophisticated algorithms – are now in place to go against the tide of misinformation.

Verifiably untrue news and conspiracies (e.g. the virus as American or Chinese bioweapon, an excuse for Bill Gates to implant trackable microchips, or as a side effect of 5G radiation) is now being “deplatformed”. Indeed, recent research has shown this taking down of false content has already been effective in stemming the spread of hate speech.

Meanwhile, when people search for information on Google, the search engine is generally effective in putting answers from more trusted resources on top – the World Health Organization getting more credit than the White House, for example. It also factors in the location of the searcher and tunes to the more localised response to the pandemic.

So far, so good. However, according to De Keulenaar’s research, actively moderated platforms such as YouTube have also found a loophole to maintain their “open and free” reputation of the past. So-called “borderline content” is not removed but rather demoted and buried down in the search results. “And these usually involve more complex narratives, such as those around QAnon,” says De Keulenaar.

So basically, if you fold in a fake story about the anti-COVID-19 effects of gargling bleach into the larger story about Donald Trump battling a cabal of Satan-worshipping paedophiles, your “news” may still get listed.

De Keulenaar: “So besides just focusing on relevance and trustworthiness to filter and rank information on crisis situations, we still need to operationalise more on context.”

Before the webinar ends, Dr Becker is asked for any final comments. “YouTube can say the truth does not exist. But given the current situation of knowledge in the scientific community, we can still talk about bullshit and non-bullshit.”

Fighting the coronavirus with data science 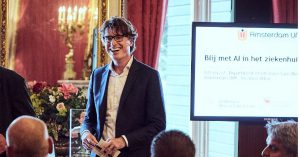 Why the Netherlands needs a single health data infrastructure – now 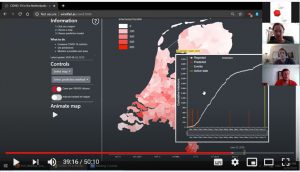