The national government has great circular ambitions. Converting this from paper to practice with all parties required for this is a tremendous task. Acceleration of the implementation of the circular economy is needed. In the Amsterdam region, the Amsterdam Economic Board has built up five years of experience with impressive results.

Major steps towards circularity have been taken in more than 20 product chains and raw material flows, together with various parties. In addition, a group of more than 40 organizations gives priority to circular procurement. The key to success is building a network of involved parties who each take their responsibility and jointly want to achieve concrete goals. With the publication on ten building blocks for network management, the Board shares its experiences in the Week of the Circular Economy. The ten building blocks are an inspiration for any professional who wants to put the circular economy into practice but cannot do it on their own. The building blocks can also be used in other major transitions (such as for energy and mobility).

The Week of the Circular Economy is the time to show which circular initiatives have a real impact and how we can accelerate. We are still a long way from the ambition of the Dutch government to be circular by 2050. Tackling climate change is rightly a priority. But this should go hand in hand with the transition to a circular economy. Circular products and services can deliver enormous reductions in greenhouse gases and reduce our over-consumption and scarcity of raw materials. The government has a crucial role in this through strong policy and targeted measures. But it needs the joint efforts of the business community, local government, knowledge institutions and civil society organizations to implement the policy. Network management can accelerate this.

“Network management is not an informal ‘let’s-see-how-it-goes’ collaboration. It is a formalized structure in which everyone has one pre-arranged – and later completed more precisely and sometimes adjusted – fulfills its role that contributes to the end result. ”

Mattress recycling as a breakthrough

Mattress recycling didn’t get off the ground in the Netherlands. There was a big difference in costs between burning mattresses and high-quality recycling. Nobody wanted to pay the bill for a circular mattress. Jacqueline Cramer then took the initiative from the Amsterdam Economic Board to bring all parties in the mattress chain together. The conclusion was that there should be a voluntary producer responsibility. Cramer acted as a ‘transition broker’, as she calls it. She got the noses in the same direction and, together with a second broker, made sure that producer responsibility came into being. This means that 60% of the mattresses will be recycled in 2025 and 75% in 2028.

“The mattress recycling was a breakthrough. By organizing the chain, it turned out that the existing deadlock could be broken. There was a willingness to change, but everyone looked at each other and nobody took the first step. ”

The example of the mattress chain does not stand alone. This applies to many circular initiatives, which must be established in a network of parties. And circular initiative is not perfect all at once, but every step opens the door to the next big steps.

Connecting conventional government management with network management creates more clout. The government is then no longer the remote policymaker, but an equal partner in the network. This is necessary because the current division of roles is not sufficient. For example, because the market has an interest in maintaining the current situation or because – if it does want to change – it needs governments, researchers and citizens. Or because something that has been agreed in parliament is not always complied with in practice or proves to be feasible.

“With a network you provide structure, so that innovations get off the ground faster and better. And if such an innovation proves to be useful in practice, more and more parties will join in. Then the ball starts rolling. ”

The ten building blocks provide guidance in the implementation of network management and are based on scientific insights and decades of experience with transition initiatives. The building blocks can be used for all kinds of transitions: for large national and regional initiatives such as the initiative Lower Energy Acceleration Program (LEAP ) where partners work on making data servers more sustainable, forming an ecosystem for emission-free city logistics (Green Deal ZES) and also neighborhoods that want to make their neighborhood greener or more energy efficient. All parties have their own role and responsibility in the network. If they fail to do so, the transition initiative will be delayed.

Handing over of publication

Jacqueline Cramer did during the week of the Circular Economy report about the publication at BNR radio, she handed a copy to Cora Smelik, Provincial Executive of Flevoland, and during the Circular Innovation Top 20 of VNO NCW Brabant Zeeland to moderator Elske Verbraak (photo). Jacqueline also spoke at it energy breakfast of 02025 . 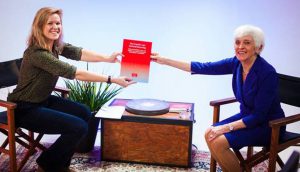 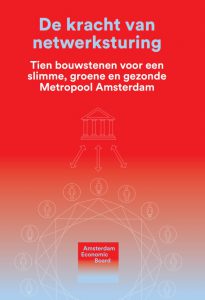