The agro-food industry produces 55% of the total amount of industrial waste in the Netherlands. At present, 80% to 90% is digested to make biogas, composted or processed into livestock feed. The rest is ploughed into the ground or incinerated. Yet a proportion of this waste is suitable for much higher-grade recycling. The Board supports parties in developing their business case and business model for higher-grade food waste processing. 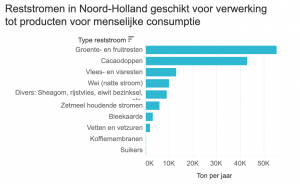