On March 7, over 20 blockchain connoisseurs met for the second meetup hosted at Growth Tribe. There were two central questions for the participants: what do you have to offer? And what do you need? Willem Koeman, Challenge Lead Digital Connectivity at the Board, immediately set high intentions during his welcome speech: he offered champagne to the participants that would already agree on a future collaboration during the meetup.

In his opening speech, Aik van Eemeren, who works at the Chief Technology Office of the City of Amsterdam, emphasised the importance of collaboration and knowledge sharing, to bring blockchain to the next level within the City. “We recently managed to put Amsterdam as a digital city on the political agenda. We strive for a freely accessible, inclusive and transparent digital city, in which we make it as easy and safe as possible for Amsterdammers to move around. In that light, we do a lot of research into the value and effectiveness of blockchain within the City.” According to Aik, it is an important milestone that the digital city is now also a political issue. “In the City Council questions are being raised about blockchain. These meetups help us to provide answers and give the digital city a boost.”

After the introduction of Willem Koeman and Aik van Eemeren, the floor was given to four different blockchain educators, who shared their experiences with those present.

Blockchain in the law

At the VU University’s law faculty, Tina van der Linden teaches a minor in Law, Ethics and Technology, where blockchain is included as a subject. In addition, as part of three different technology law masters, she teaches an elective course Blockchain and other disruptive business-tech: challenges to the law, in which 95 students are currently participating. In the final paper that students must write, they must explain a use case for a specific area of ​​law and explain in detail how – and why – it works.

Tina: “I encourage my students to be extremely critical. Blockchain is fantastic, but not great: for many use cases you can just as easily use a traditional database. That’s why I let them think carefully about the functionality, and of course about the legal implications of blockchain.”

Tina regularly provides lectures at law firms and supervises many students who write their thesis on blockchain and thus increase their chances on the legal labor market of the future. “The students are extremely motivated to put their knowledge into practice. For example, some students are already helping startups with legal issues surrounding blockchain. With my lectures I hope to contribute to a new generation of lawyers who know and can work with blockchain, in line with the ambitions of the Dutch Blockchain Coalition.”

The second speaker was Sam Wouters from Growth Tribe, who talked about his goal as Lead Blockchain Trainer: simplifying the explanation of blockchain so that everyone can understand it. Growth Tribe’s motto is empowering people to rapidly and enjoyably gain skills in a fast-changing world. That is why they have set up various courses, including a two-day blockchain and crypto training, which Sam highlighted in the meetup. He has successfully trained over 75 people. The blockchain course is currently on hold for a while, because Growth Tribe is looking at which area of ​​knowledge is currently most needed.

Sam fully agreed with Tina: blockchain is not always the right way. He notices that there is a great demand from companies to work with blockchain, but according to him, businesses are mainly looking for solutions, without really wanting to delve into the matter. “Many people think they are experts, while they really don’t know enough about blockchain functionality. Regardless of the question, they assume that blockchain is the answer. To let companies find the answer that is functionally best for their business, blockchain education is desperately needed.”

Finally the floor was given to Rudolf van Ee from Blockchain Talent Lab and Eléonore Blanc from CryptoCanal, who together fight for the development of the blockchain community. Both regularly organise events and meetups and they work on a knowledge platform. Rudolf: “With our Talent Lab we focus on blockchain training programs for corporate companies and we link talent to job openings. We want to make the Netherlands the most significant blockchain hub and thanks to the Board’s meetups, we are a constantly expanding our community. ”

Eléonore also believes in the power of meetups: with CryptoCanal she collects all blockchain events in and outside the metropolitan region. “The Amsterdam blockchain community is of very good quality. It is extremely important that we continue to learn from each other and not get stuck in a tunnel vision of existing use cases. We still don’t know everything, and the hunger for knowledge is enormous. Meetups are a great way to reinforce each other.”

After these presentations, it was finally time for the long-awaited blockchain speed dating: what can we offer each other? The participants also set to work creating a blockchain education ecosystem map on which they could place themselves. This gave a good overview of which parties were present and where they are located in the ecosystem. What the attendees were looking for varied considerably: from a large meeting room and a platform to gather insights from those meetings, to sparring partners, marketing advice and concrete projects. But the range was just as diverse: from knowledge, experiences and ideas to speakers, platforms and networks. It did not take long before the first collaborations could be concluded – with champagne of course. 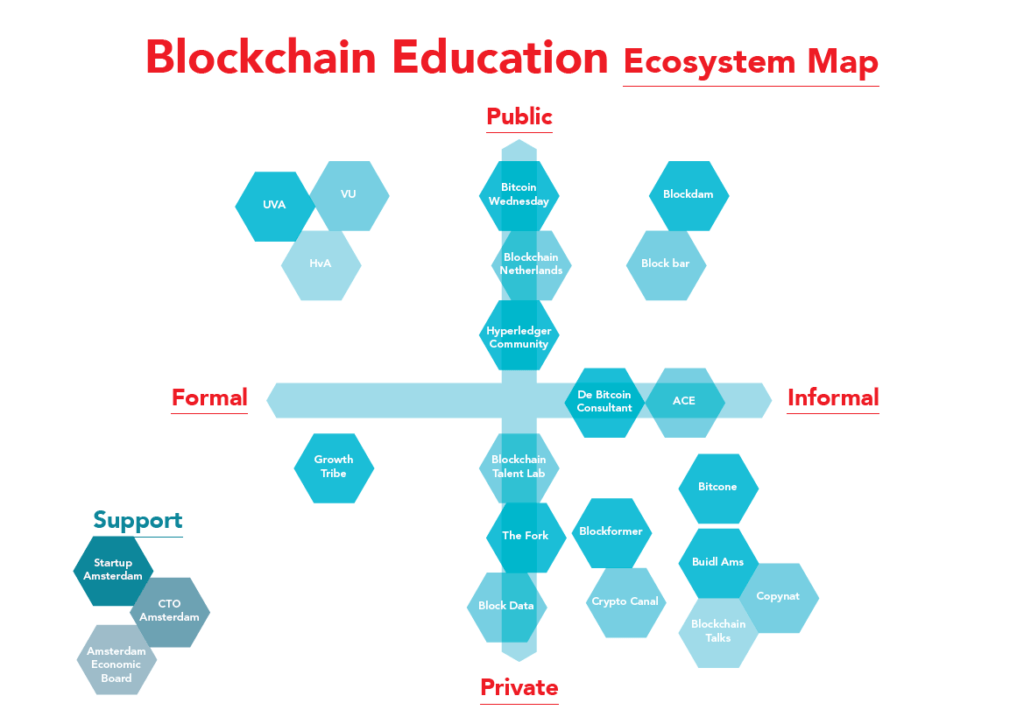 In the coming period, the Board will monitor the proposed collaborations and will, where possible, propose other collaborations based on supply and demand. The next blockchain meetup will take place in about two months. Do you want to be there or think with us about the subject or content? Please contact Willem Koeman, Challenge Lead Digital Connectivity. 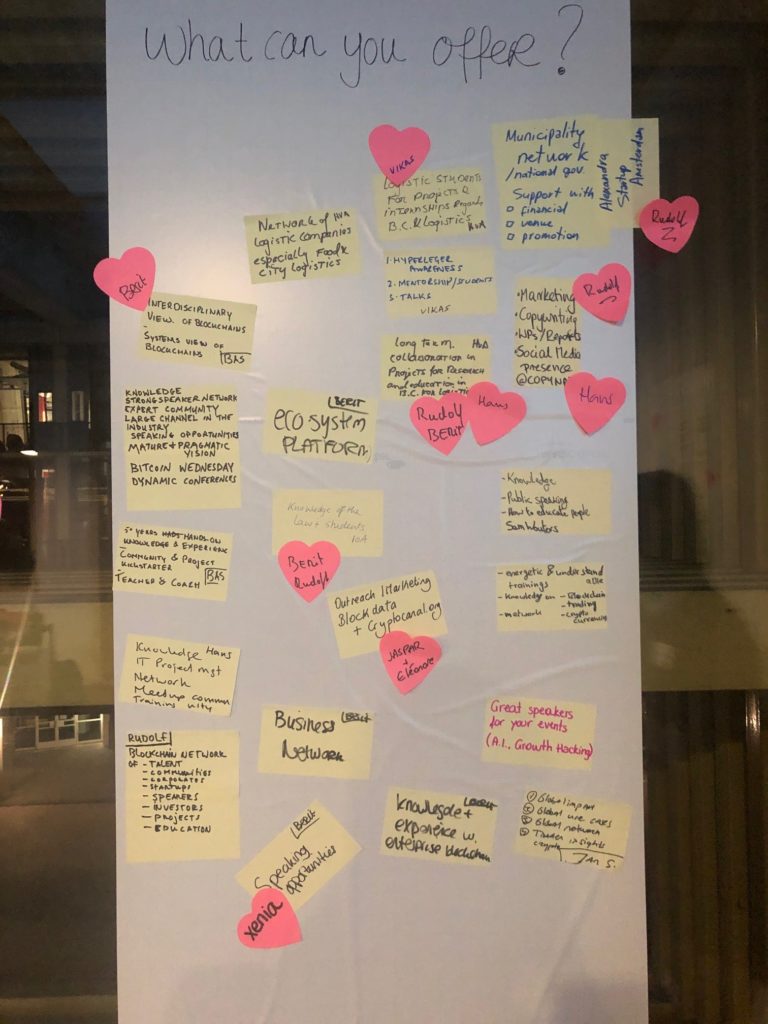