In the International Alliances scenario, Europe disintegrates, and government and the economy operate strongly top down, leading to a world of protectionism and nationalism, with disagreements between former EU member states. In this world, urban regions seek alliances with other regions to gain competitive advantages.
This scenario was last updated on 9 June 2020. 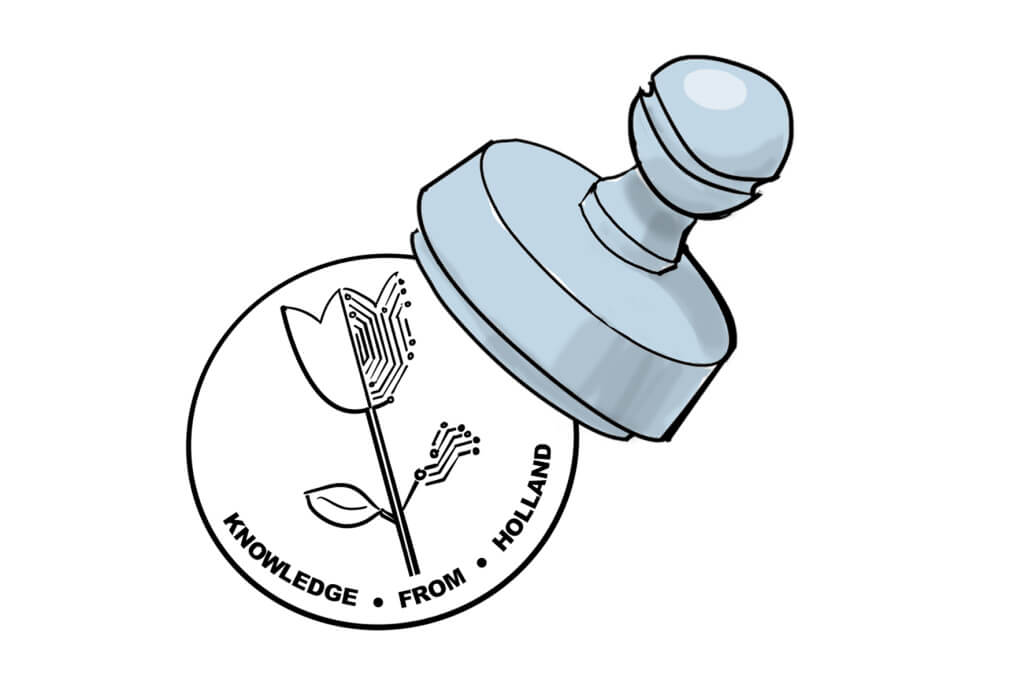 Keywords in this scenario

Below you can see our illustration for discussion for the International Alliances scenario. Each scenario has one of these illustrations (there are links to the other three scenarios at the bottom of this article) visualising the important aspects of each scenario and the differences between them. In combination with the text below, this gives a quick impression of the world that each scenario envisages. 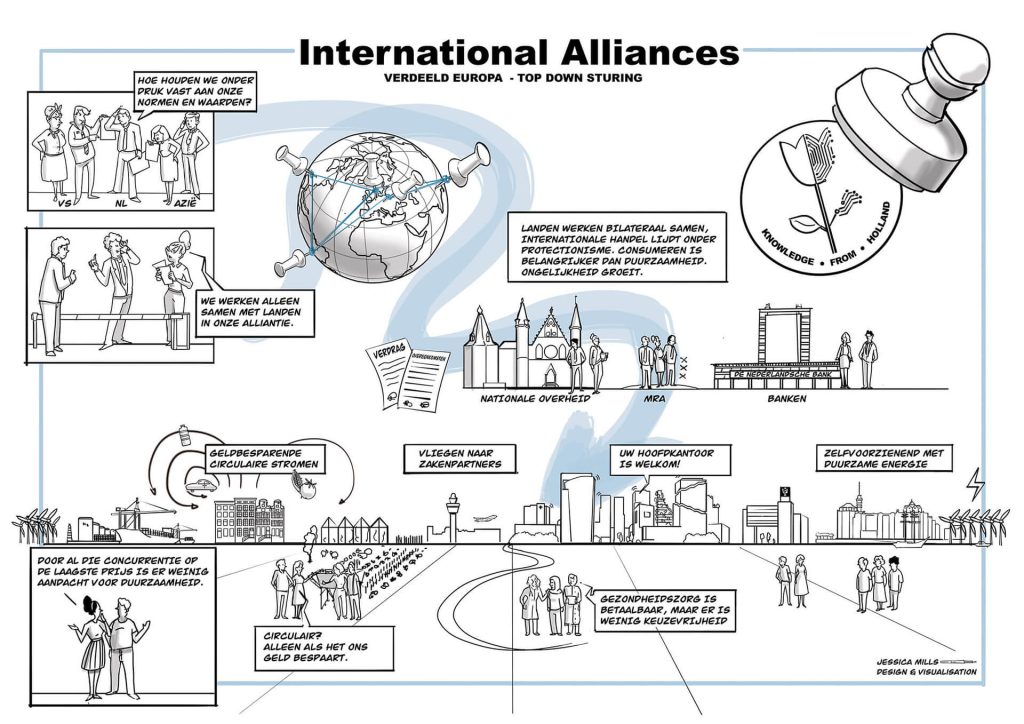 It is 2040. Major disagreements between member states have divided the EU. Trade within Europe has contracted after years of bickering, nationalism and populism. National governments have taken back powers and now act on the basis of economic self-interest. They try to retain and/or attract companies by means of tax benefits and deregulation. Large multinationals play governments off against each other. A weakened Brussels doesn’t have the weight to unite countries and regions. With a fragmented Europe, it is hard to make international agreements or to coordinate their implementation. European migration is stimulated by wide differences between rich and poor. Many people – sometimes against their better judgment – seek happiness and security elsewhere, but the own-people-first mentality stands in their way.

Since Europe is no longer an important player, companies and universities focus on relationships within the Netherlands and its neighbouring countries, and on strategic alliances abroad. This runs smoothly thanks to accelerated digitisation. European innovation funds have disappeared and the European Green Deal never got off the ground. As a result, research and development has to be financed differently. Dutch resources are limited, and alliances are needed with cash-rich companies, philanthropists, and governments, not only in Europe, but also in Asia and America. They make the rules and it is hard to guarantee European values ​​and standards. With its highly skilled workforce and international entrepreneurial spirit, the Netherlands is still an attractive trading partner. More than ever, the Dutch knowledge regions are uniting to pool their strength under the leadership of the Ministry of Economy in ‘Knowledge from Holland’.

We are working to create the smart, green and healthy metropolis of the future. In the International Alliances scenario there are a number of strengths that help with this, and at the same time, there are also threats. What should and can we do to take the right steps in this scenario?

Little initiative from a divided society

Due to the disintegration of Europe, the Netherlands increasingly has to look after itself. Central government has assumed a wide range of powers to do this as effectively as possible. Across the country there is a realisation that the country has to unite to avoid being dragged down by the international turmoil. The traditional institutions of governments, companies and banks are still in the driver’s seat. People complain about the government and about the power of big companies, but society has produced no alternatives.

Within the AMA, relations with central government play an important role, and Amsterdam occupies an increasingly important and influential position, as do the regions of Eindhoven, Rotterdam and The Hague. At the same time, these regions try to outcompete one another. Other parts of the country participate, but recognise that they are highly dependent economically – particularly on Amsterdam. The municipal executive has weekly meetings with the minister to conclude smart deals with foreign parties, supported by entrepreneurs and knowledge workers who are excellently positioned in this international playing field. A strong national road and rail network allows for physical connection. Within the AMA, Amsterdam takes the lead. The less powerful sub-regions clearly have less say.

International contacts are chiefly maintained with a few favourably disposed regions and parties to which the Netherlands is complementary and with which it has good bilateral ties. Amsterdam Airport Schiphol mainly focuses on the regions where these business contacts are located. European rail connections have not been established. The tourists who visit the Netherlands do so by plane, bus or car.

Economic uncertainty makes many people in the AMA thrifty. Consumers want the cheapest and most convenient product, even if it is mass-produced by a big multinational company in a low-wage country. Consumers and small businesses have become more dependent on these multinationals due to a lack of European harmonisation and standardisation. This makes it hard to switch to a competitor. Sustainability and social responsibility are seen as a bonus but are not a priority. In this individualistic world, sharing concepts have hardly caught on. Healthcare is also highly dependent on a few large data and pharmaceutical companies, which offer cost-efficient solutions, but under inflexible conditions. Principles of privacy and open data are not necessarily respected.

Efficiency and substitution for more energy and raw materials security

National governments realise the urgency of reducing their dependence on raw materials and fossil energy as protectionism and trade wars have reduced the security of supply. The Netherlands is also taking major steps and power consumption is being reduced, whether voluntarily or under compulsion. Offshore windmills, although expensive due to the import of materials, are an important way to increase independence in power generation. Because more countries are making the same move, the offshore companies remain world-class players. Gas from the Groningen gas field is still used regularly in cold winters. Also in the field of raw materials, products from the Netherlands are used as much as possible and there is a strong commitment to the circular economy; after all, smart reuse is much cheaper in this scenario than new imports. Closing cycles on the right scale for circular initiatives often proves to be problematic. The agricultural sector increasingly focuses on the needs of its own national population.

Maritime trade is becoming less important for the AMA and the space in the ports is used for circular factories. Power generated at sea arrives onshore in the region, which makes it a popular location for energy-intensive industry. This does require industry to make the switch from gas to electricity, hydrogen or biogas.

Companies (and governments) try to invent the wheel and keep it for themselves. The challenge in this scenario therefore chiefly lies in overcoming the lack of willingness to cooperate and share knowledge, and in facilitating the right alliances. An additional challenge is to create the preconditions needed to shift the focus from efficiency to genuine, sustainable innovation. To attract investments locally, a regional fund has been set up in which wealthy individuals and a limited number of companies also invest. 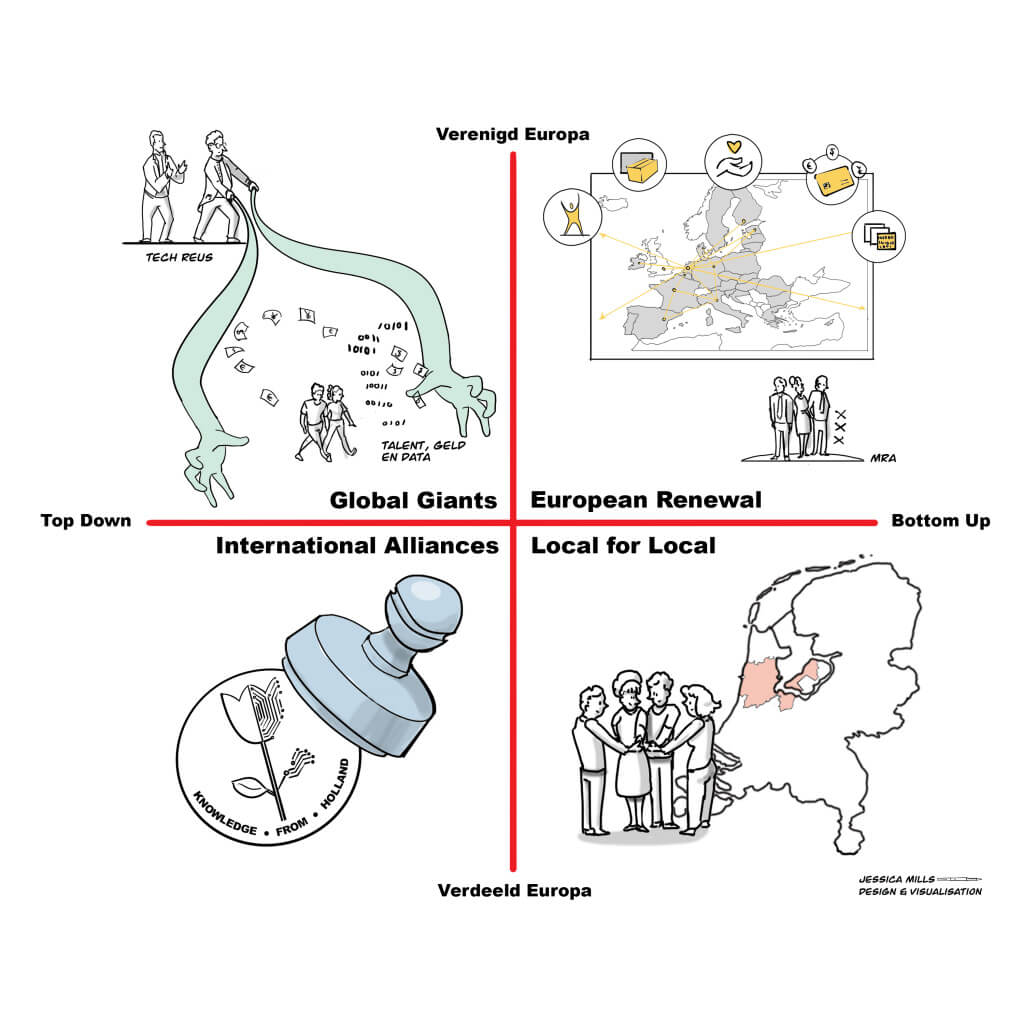 The four scenarios for the Amsterdam Metropolitan Area

The International Alliances scenario is one of the four AMA scenarios.