The impact of digital transformation

The session was led by Bob de Wit, professor of Strategic Leadership at Nyenrode Business University. He sketched a picture of the current digital revolution and its impact on various sectors. In particular, that the impending wave of Artificial Intelligence (AI) will fundamentally change our society. There was considerable discussion about the pace of development of AI and its potential risks: does our society need more time to prepare for these self-learning computers? It became clear that it will be important to include the social innovation that triggers technological innovation: for example, the importance of social networks to the robotisation of healthcare, or the aspect of privacy when personal data is used for prevention.

During working sessions, the experts debated the issue of which technologies will have the greatest impact on health in 2025. Three technological drivers were identified as key enablers:

With these insights as a point of departure, the participants then sketched out their perspectives on the future of health. The highlights from these visions of the future are presented below, while also identifying potential downsides of each future (nightmare?) scenario.

In his closing words, Bob de Wit identified several overarching themes that emerged from the session: 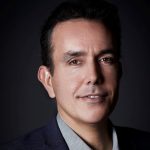