The Amsterdam Metropolitan Area, like the rest of the world, faces the challenge of using resources much more efficiently.

The growth of the world population, the increase of consumption of materials and the rise in the production of waste is leading to growing scarcity of some key resources, more volatile prices and severe impact on the environment. This problem of resource efficiency will even exacerbate as a result of the staggering increase in urbanization. In 1950 30 per cent of the world’s population was urban, while in 2014 54 per cent resides in urban areas. By 2050, 66 per cent of the world’s population is projected to be urban.

In order to decouple economic growth and development from the consumption of finite resources, we need to move from a linear to a circular economy.

A circular economy is an economic and industrial system based on the reuse of products and raw materials and the restorative capacity of natural resources. It attempts to minimize value destruction in the overall system and to maximize value creation in each link in the system. Within Europe, the Netherlands is one of the leaders in moving to a circular economy. However, although considerable progress has been made, the Netherlands still has a long way to go in grasping the full potential of a circular economy.

The Amsterdam Metropolitan Area is in an outstanding position to become a leading circular resources hub in Europe.

It is a comparatively densely populated region (2.33 million inhabitants) in which large amounts of products and materials circulate, and many innovative and sustainable entrepreneurs are active. The region has an excellent logistic network across all transport modes (including a main harbour and global airport (Schiphol) and prime railways and roads), and a coordinated spatial planning. It composes of a broad spectrum of economic activities and knowledge infrastructure, while societal support is present for initiatives in the area of the circular economy.

Some initiatives can be taken by municipalities themselves such as promoting the separation of waste by consumers and companies and developing advanced platforms to reuse, refurbish and remanufacture products. However, other initiatives require coordination at a higher scale, primarily the region, for example to set up cost-efficient recycling facilities and join forces in circular procurement. Thus, it requires a clear division of tasks and responsibilities among the municipalities involved in order to develop into an outstanding circular hub. Governors of the region have recognized this precondition and are willing to act accordingly.

The Amsterdam Economic Board has taken the lead to coordinate and accelerate those circular activities that need to be set up at regional scale.

The Board has initiated a circular economy programme in January 2015 in close cooperation with the Amsterdam Metropolitan Area governments, business, knowledge institutes and citizens. In their view this offers societal merits in all respects: People, Planet and Profit. It can lead to cost reduction, create new business and employment, and save resources and energy. In addition, it can stimulate the development of knowledge, innovation and new businesses, and increase the provision of supply of key resources. The key objectives of the programme for 2025 are: 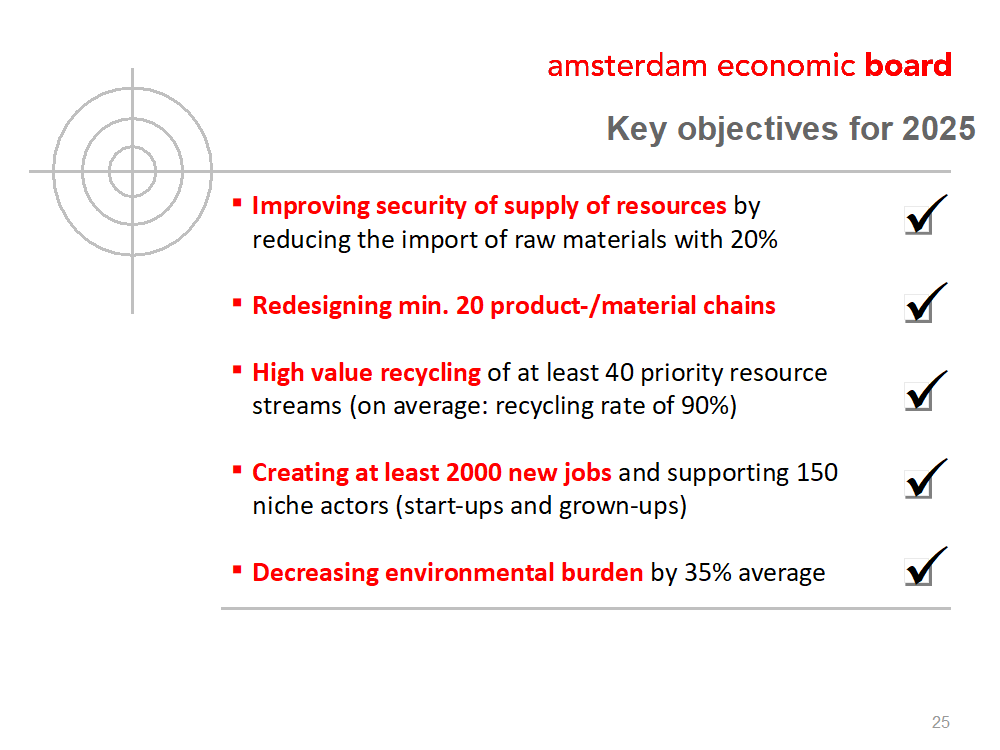 Moving towards a circular economy is not business as usual but requires a fundamental shift in our economic system. To make this change we need to adopt an innovative governance approach, called transition management, which is based on the following guiding principles[1].

Based on these guiding principles the Metropole region of Amsterdam has initiated an ambitious programme, called ‘The Metropole region of Amsterdam as Circular Resources Hub’. The execution of the programme was in the hands of the challenge lead Circular Economy of the Amsterdam Economic Board, respectively Dominique van Ratingen (2015-2016) and Marjolein Brasz (2016-2019) and is orchestrated by Jacqueline Cramer, member of the Amsterdam Economic Board (2015-present).

The design of the programme

The circular economy programme of the Amsterdam Economic Board consists of four phases:

Phase 3: Scaling up at regional level

In 2015 – 2018 the programme has focused on phases 1 and 2. In 2019 phase 3 has started for those initiatives that realised new business development. Phase 4 is not yet in sight. Phase 1 evolved relatively fast due to the comparatively favourable cultural and political climate in the region. This positive climate has not only enabled the emergence of the circular economy programme of the Board, but also triggered other circular initiatives at local level and within industry. Phase 2 – building circular initiatives – is key in the implementation of the programme and can cover a variety of activities. After four years of implementation the results of the programme were monitored and evaluated. Reflecting upon these results led to the start of a next round of activities since January 2019.

To stretch the circular ambition of the programme, the aim was to set up activities that focus on the highest possible steps on the ladder of circularity[2] : 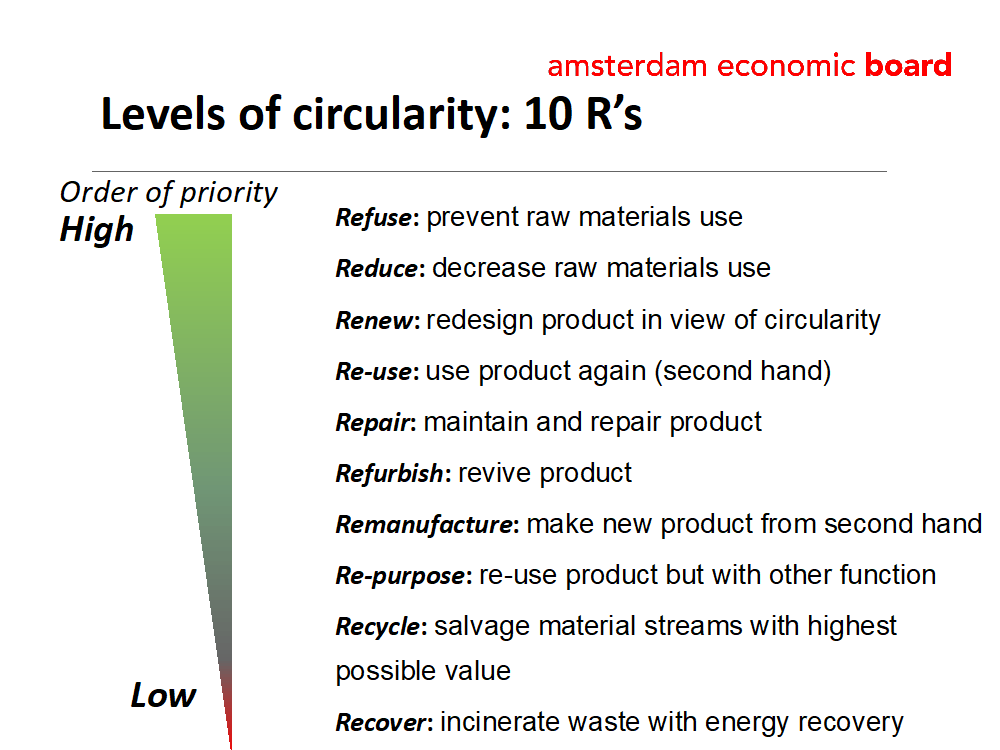 Based on the ladder of circularity the strategic choice of the programme in 2015-2018 was to focus on:

This programme aims to stimulate circular products through circular procurement executed by local governments and other contractors (for example businesses and  educational and research institutions). Two communities of practice were set up successively, with in total 22 representatives of procurement or sustainability divisions. The goal was to gain knowledge about circular procurement, exchange experiences and explore potential cooperation. Each community of practice consisted of 6 sessions, in which the participants learned from each other and acquired the necessary expertise to implement circular procurement within their own organisation. The participants chose a few procurement trajectories to start with and planned to add more in the coming years. It was left to the participants themselves (often being procurement managers within their organisation) to decide which trajectories they would select. In order to be as innovative as possible, the participants were encouraged to include start-ups and grownups as well. The investments were made particularly in the following five product groups: demolition and construction, office furniture, road signs, catering, and data servers and ICT business equipment.

Key results were: 150 million investments in circular procurement. Moreover, all 32 municipalities except one and the two provinces have signed a manifesto in which they committed to realise 10% circular procurement in 2022, 50% in 2025 and 100% as soon after as feasible. 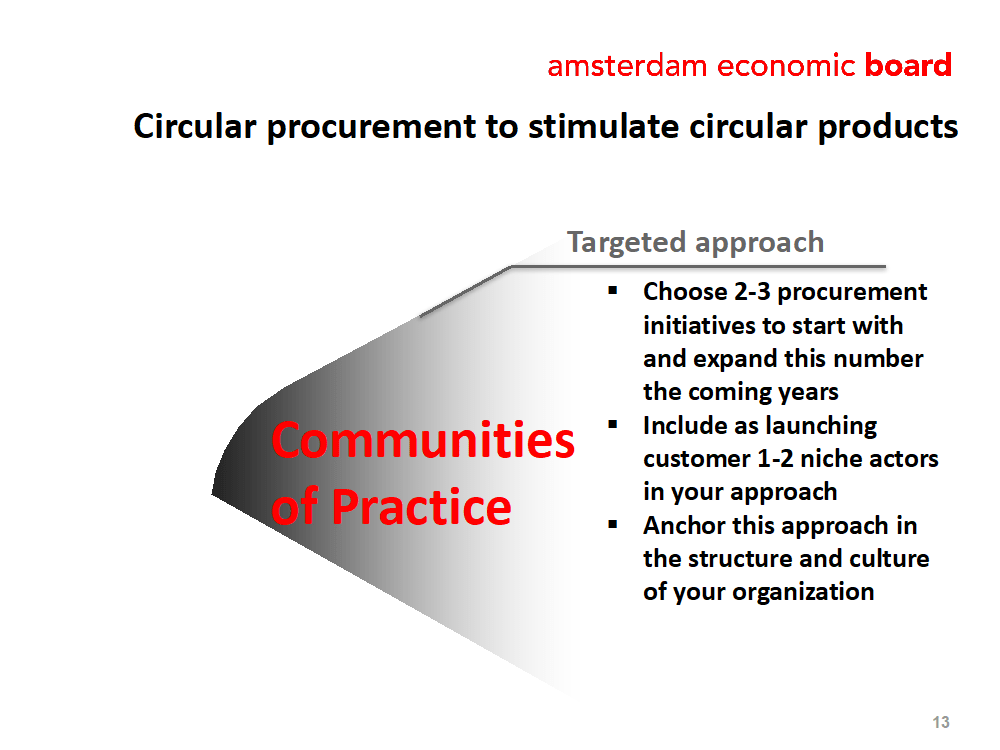 This programme started with the selection of the following nine main resource streams, consisting of many sub-streams: 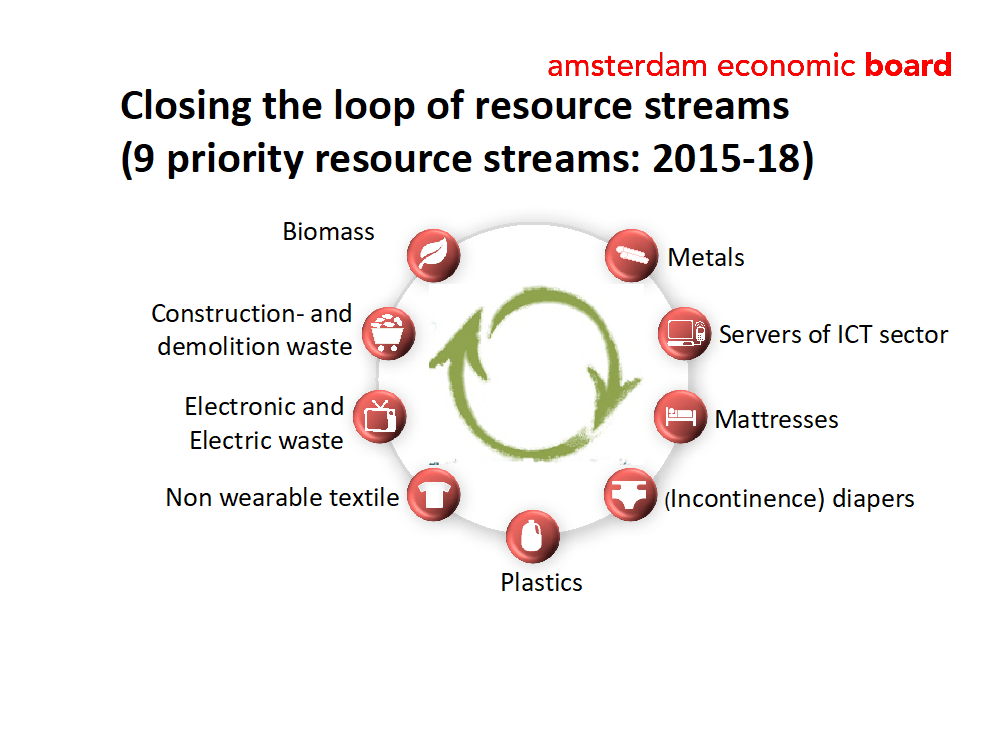 These resource streams were chosen because of their high volumes and large environmental footprint and their potential for innovative improvement in terms of recycling, product reuse and redesign. First, priority was given to household waste streams, because more public data are available about those compared to business waste streams. Some business resource streams were also included because these were prioritised by members of the Amsterdam Economic Board (viz. data servers, demolition and building, metals and the resource stream of the food industry (sub-stream of biomass). The objective was to build consortia of parties that were willing to jointly set up challenging circular initiatives.

The Board designed and adopted a generic approach to generate and select the most promising options for closing the loop of each resource stream[3]. Experiences showed, however, that this generic approach had to be applied flexibly. The overall approach was as follows: 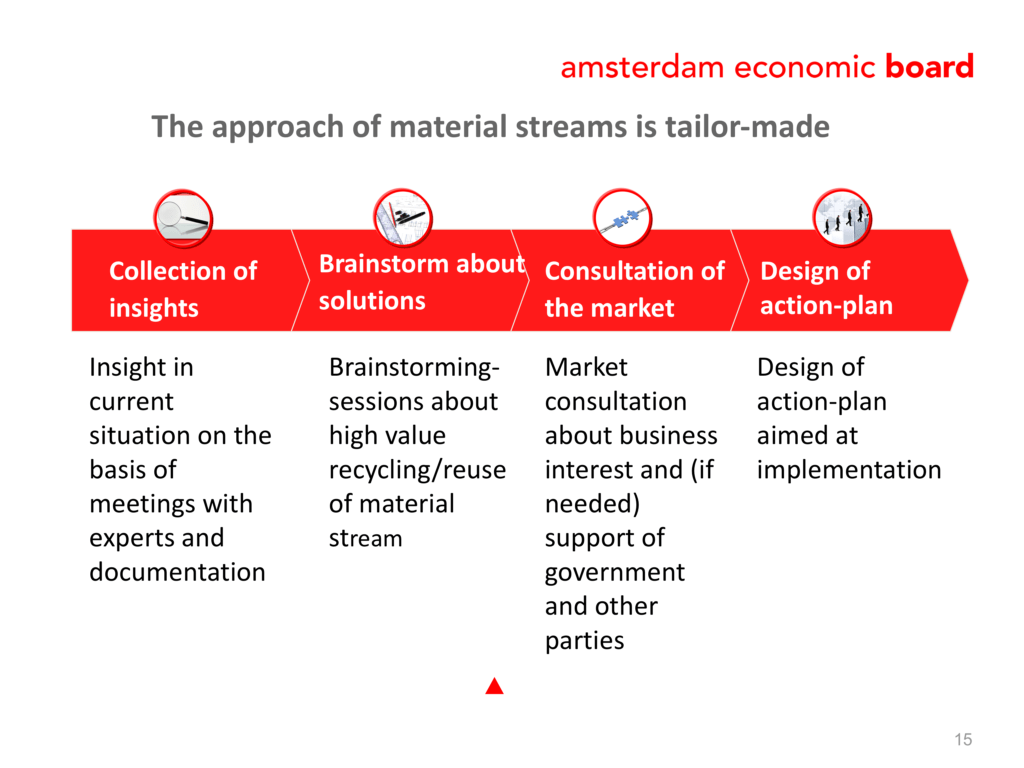 The approach adopted has often led to innovative steps being taken towards the circular economy. The actors involved strived for ambitious solutions, both for generating new products (flavour additives, phosphate and calcite, insulation material and regenerated clothes, diapers and mattresses) and for reuse of products (building materials and data servers).

New business models were frequently adopted, namely in about 60 percent of all cases. The model most often applied was the ‘shared costs and benefits model’, in which key actors jointly estimate the overall cost-result ratio in advance and make a calculation that reflects the share of each actor in a well-balanced manner. Such an honest account of the costs and benefits was often needed to build a viable consortium, which was economically attractive for all consortium partners. Other new business models being applied were: leasing, sharing and the introduction of a cooperative or voluntary producer responsibility scheme.

The key results were high value recycling and product-redesign and reuse of 20 sub streams, viz.:

See also : Half a million data servers a year discarded in the Netherlands

In the coming four years (2019-2023) the circular economy programme of the Amsterdam Economic Board will focus on:

The objective for 2019-2023 is to scale up at least 15 initiatives to a regional scale, increase the total investments in circular procurement to 10% (including the  redesign of 17 material – and product chains) and build at least 15 circular consortia of industrial resource streams.

The main lesson we learned until now is that the success depends on a number of main drivers that are relevant for all initiatives. First, there should be one or a limited number of initiators who act as inspiring change agents. Secondly, cooperation across the product chain (including end-users) is key, including trust and mutual respect. Thirdly, new financial and organizational arrangements are important to create a convincing business case. And finally, additional tailor-made incentives need to be attuned to the specific product-/waste stream at stake. One of these incentives is circular procurement [4] . 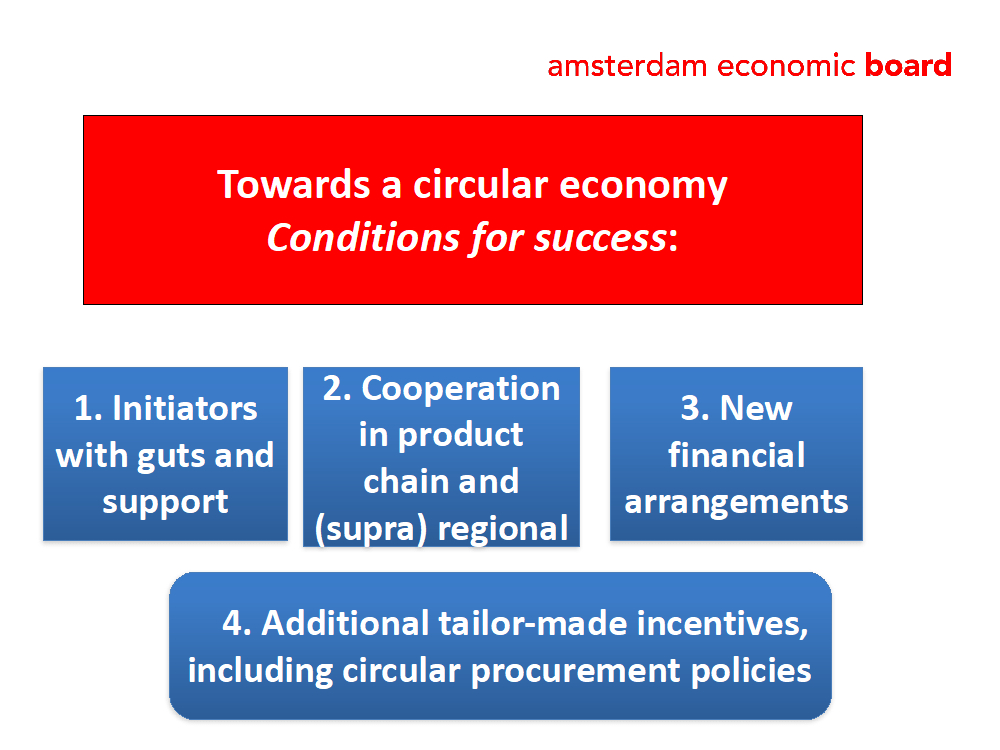 A combined effort on the part of innovative companies and forward-thinking universities, plus a government to stimulate, facilitate and connect them, is a prerequisite for success. Together we know more, and we can achieve more. So we invite all municipalities, companies, startups, universities and research institutes to join the programme. Tell us about your plans, initiatives and innovative product or service, or let us know where you need help. We can then combine our diversity and activities and accelerate the transition to a circular economy, with the aim of putting the Amsterdam Metropolitan Area on the map as the prime circular hotspot in the Netherlands and Europe.

This article was realised with the ongoing support of Marjolein Brasz, Challenge Lead Circular Economy (2016-2019).